A Holistic System Of Supplements For Your Pet

BiologicVET supplements are a carefully designed holistic system, formulated to work synergistically to maximize the nutritional content of your pet’s diet.

The naturally-sourced ingredients are chosen for their high bioavailability of nutrients and the formulas are specifically designed to meet the unique gastrointestinal and metabolic needs of canines and felines.

The foundation of each powder supplement is a prebiotic, lignan-rich blend of organic defatted flax, sunflower and sesame seed fiber, which supports healthy immune and metabolic function. The free-form non-medicinal nutrients ensure an improved delivery of nutrition, facilitating greater use of the active ingredients, both in BiologicVET products and in your preferred brand of raw, dry or moist pet food.

In addition to the condition-specific ingredients in each powder supplement, the powdered BiologicVET delivery system is rich in:

Prebiotics feed the naturally present healthy gut flora (bacteria) in your pet’s lower gastrointestinal tract. This encourages a proper flora population and facilitates nutrient bioavailability; at the same time, promoting a normal microbiome. Not only do prebiotics support your pet’s digestive health, they maintain their immune function.

Lignans are naturally occurring phytoestrogens (plant-based hormones). They function as antioxidants and are converted into enterolactone and enterodiol (mammalian lignans). Their role is the control of normal hormonal balance and function, especially helpful when an animal has been spayed or neutered. 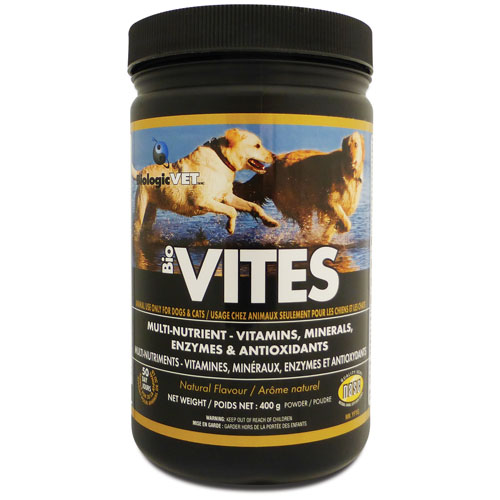 Helps Maintain General Health of All Ages and Breeds

Active Enzymes and Antioxidants in Every Product

Many BiologicVET formulas include additional enzymes and antioxidants to optimize the beneficial activity of nutrients in the maintenance of the animal’s general health.

Enzymes are used by your pet’s body in many different physiological functions such as healthy cellular activity, detoxification and breaking down the nutrients in their food.

The digestive system is the gateway to the immune system. Your pet’s lower gastrointestinal tract is where vital nutrients from their diet absorb and fuel healthy immune function and metabolism. Healthy immune response and metabolism depend on effective absorption and bioavailability of nutrients in order to sustain overall health.

Used and recommended by leading veterinarians

No pills and no fuss!

For those interested in a little review of the history and systems in which we operate, supplements for animals, like vitamin and mineral products, have been on the market for many years. The FDA’s Center for Veterinary Medicine (CVM) is responsible for ensuring that animal food is safe and properly labeled. Dietary supplements such as vitamins and minerals, fall into the category of animal feeds.

In 1994, the Dietary Supplement Health Education Act (DSHEA) was passed by the United States Congress and signed into law.  This legislation created Dietary Supplements as a specific subset category of ‘Food’ and allowed the marketing of Dietary Supplements for human use. Unfortunately, when the issue was debated in Congress, animals were not considered and language was not included in the legislation to provide for similar products for animals to be similarly regulated.

It is really a shame that this happened. The Congressional record shows the topic of its application to animals was neither specifically included nor excluded by Congress, but rather, was overlooked. Though it seems reasonable to us to include animals not intended for human consumption (such as dogs, cats and horses) in such legislation, the animal supplement industry did not really exist to any significant degree in 1994, therefore no one lobbied for dietary supplements for animals the way they did for people.

Since DSHEA passed by Congress, animal products generally contain similar ingredients to those in human dietary supplements, including substances generally recognized as safe (GRAS), listed in the Official Publication of the Association of American Feed Control Officials (AAFCO), or approved food additive ingredients.

However, in 1996 the FDA stated that they believe that DSHEA does not apply to animals.

This opinion places products marketed for animals that are similar to human Dietary Supplements with only two possible legal categories under US Law:  Animal Food/Feed or Drugs.

About Animal Food/Feed and Animal Drugs

According to the courts, “foods” by definition provide nutrition, taste or aroma, and can only affect the body through these channels. If a food affects the structure or function of the body, it does so, for example, by supporting proper bone structure by providing nutrients such as calcium. The Act requires that animal foods, like human foods, be pure and wholesome, contain no harmful or deleterious substances, and be truthfully labeled.

If an ingredient or substance has an effect outside of the definition above,we may need to call it a drug. If it affects the structure or function of the body by improving joint function, with something apart from its nutritive value, for example, it is considered a drug. When a substance, including one considered food, is to be used for the treatment or prevention of disease or other “non-food” effect, the FDA considers it a drug. Structure/function effects extending beyond the “food” umbrella also include claims for improved or increased production and performance, and alteration or improvement in function.

Under the Act, animal drugs, even common ones found in human dietary supplements such as Glucosamine, Chondroitin, MSM (methylsulfonylmethane), etc., must be shown to be safe and effective for their intended use by adequate data from controlled scientific studies. If a product on the market is not approved, it may be deemed an adulterated drug and subject to regulatory action. The increased consumer demand for animal health supplements creates a significant issue for the industry in that many ingredients, are not approved for use in animal food/feed.

The NASC’s and the animal health supplement industry

Consumer continue to demand the access to these products, which are available in Canada and elsewhere. The NASC are the organization that was needed in 1994 to bring this issue to Congress, and they are now working diligently to achieve a viable long-term solution, and become part of a significant voice that will mold the future of our industry.

There is more information about NASC on our ‘about’ page.

Surveys conducted by NASC indicate that there are over 400 ingredients currently marketed by NASC members that are unapproved for use in animal feed products. We look forward to a day when the regulatory framework catches up with consumer demand.